The optimal antenna length in terms of its efficiency is ¼-1/2 wavelength. Shorter antennas will drastically reduce the communication range and the quality of the connection. Antennas shorter than 1/10 of a wavelength are best avoided at all if possible.

8.Another important parameter is antenna polarization. You should clearly distinguish which polarization you want to work with. For communication in the near field (up to 30-40 km), which occurs by a surface ground wave, antennas with vertical polarization are used. In this case, the antenna radiator is located vertically, and radiation occurs along the earth's surface.

Installation of a dipole antenna for zenith radiation ( NVIS )

For radio communication at short distances within a radius of 60-150 km,   it is recommended to provide maximum radiation upward (to the zenith) commonly called Near Vertical Incidence Skywave (NVIS). Those radio waves reflected from the lower layers of the ionosphere will be reflected straight down and cover the above-designated surface of the territory. To form such a radiation pattern, the dipole antenna must be installed parallel to the ground, see Fig.

In this case the radiation diagram in the vertical plane will look like this (see Fig). 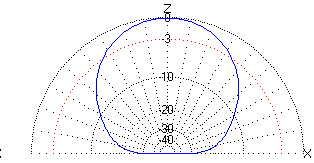 For radio communication at a distance of more than 200 km, it is recommended to increase the radiation level at a lower angle to the horizon to achieve a radiation pattern in the following form: 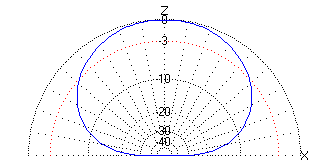 For this purpose, an installation of the antenna in the form of a so called „Inverted Vee“ or a „sloper“ is used, see Fig.

For communication in the near zone of 0-50 km   , surface waves aew used which propagates with vertical polarization along the earth's surface.

Therefore it is recommended to achieve a radiation pattern also with a maximum radiation along the earth's surface (see fig.). 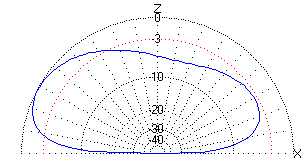 The most popular antenna for use in HF radio communications is a half-wave dipole, fed in the middle. However, if dipoles are fed from the end, such antennas are called (resonant) End Fed Long Wire (EFLW) or sometimes Fuchs Antennas.

From the name it is easy to understand that the length of the antenna wire is half the wavelength. For low frequencies, this is several tens of meters, which can be a problem when installed in an open field or tundra or in a forest. Therefore, extension coils are often used to reduce the size of the antenna. But at the same time, the main electrical parameter of the antenna, its impedance, changes. For the antenna to have the best trasmitting and receiving efficiency, its impedance must match the impedance of the feed line.

In order not to go deep into theory, just imagine that you are joining together garden hoses of different diameters. To do this, you have to use various adapters. So in antenna technology it is necessary to use matching devices, or baluns, to match the antenna impedance with the characteristic impedance of the feeder-supply cable between the radio station and the antenna wire. For the same reason, the length of the feeder can be determined, depending on the operating frequency. The quality of matching of the entire antenna-feeder path is determined by the standing wave ratio (SWR). A good value is considered to be a VSWR in the range of 1.0-1.5, whereas 1.5-2 can be considered acceptable. Above 2 the VSWR is bad, and a value above 3 is absolutely not acceptable.

If the antenna is designed to operate at several frequenciy bands, then it may include traps in its design .  Like extension coils, they are inserted in the wire in the antenna, creating additional resonance for additional frequency bands.

Insulators should be also given special attention, since they prevent leakage of high-frequency currents from the antenna strip into the  guy wires.

Always use high-quality high-frequency connectors to connect the feeder to an antenna or radio station .  All connections in connectors must be soldered. 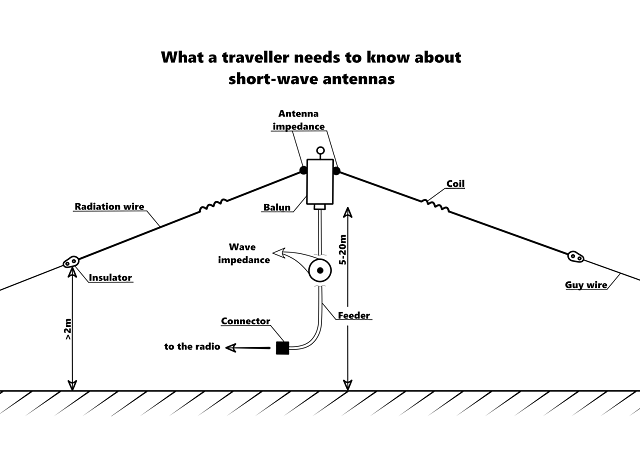 Never shorten or lengthen the antenna if the radio is designed to work with a certain resonant antenna and therefor has no build-in antenna tuner!

The antenna should not touch other objects with any of its parts, including tree trunks or branches.

Do not install the antenna near sources of interference such as LED or "energy saving" lamps, frequency converters, transformerless power supplies, and other electronics.

Always mount the antenna as high as possible, do not think that 20 m is high for an HF antenna.

By following these simple rules, you will do everything possible to ensure high-quality radio communications.